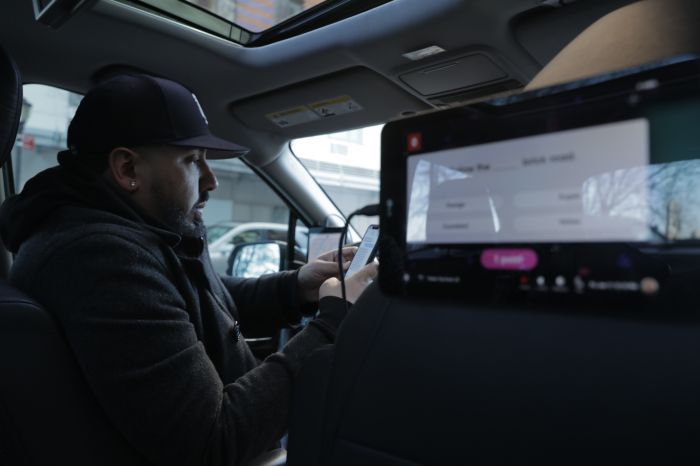 Al Castillo doesn’t have a traditional job. As a full-time rideshare driver in New York City, his office is his 2017 Honda Pilot.

Castillo, 33, started driving for apps like Uber, Lyft and Juno about four years ago, and he’s been driving professionally for much longer. Before ridesharing took off in New York City, he drove school buses for seven years. He also drove for taxi service companies, which is how many New Yorkers got from point A to point B before Uber arrived in May 2011.

What’s it really like to drive full-time in one of the busiest cities in America? I spent a day on the road with Castillo to find out.

Castillo typically works six days a week, Monday through Saturday. On weekdays, he starts driving between 6 and 7 a.m. and finishes up between 4 and 5 p.m. That’s nine to 11 hours a day. On Saturday, he starts his day a little later, between 8 and 9 a.m.

On this particular morning, a Wednesday, he was “feeling sleepy,” he tells me, and left his home in Brooklyn at 7 a.m. First, though, he grabbed breakfast at Dunkin’ Donuts.

The flexibility that comes with being your own boss makes up for the long hours, says Castillo. The father of three schedules his day so that he can be home in time to pick his kids up from school, help with homework and have a family dinner.

On a typical day, Castillo brings home $250. If he works Monday to Saturday, that’s $1,500 per week, which comes out to about $6,000 a month. He earns an additional $100 to $300 per month by using Cargo, which pays him a monthly rate for selling products like snacks and headphones to passengers, and Play Octopus, which pays him to mount a tablet that offers trivia games and plays ads.

Castillo gets paid per ride and his earnings depend on how long the trip is, how much distance he covers and whether or not there’s “surge pricing,” which is when demand for rides is high and prices for passengers goes up. Surge pricing, or “prime time,” as Lyft calls it, tends to happen during rush hour, bad weather or if there’s a big event going on in the area.

Uber and Lyft both collect about 30 percent of all passenger fares, Castillo tells me. Juno takes just 16 percent, but it’s not as popular an app yet, he adds. Sure enough, we don’t get one call from Juno over the course of the day and, instead, flip back and forth between Uber and Lyft.

He has all three because, depending on what neighborhood he’s driving in, one app may be busier than the others. “People in Bed Stuy [Brooklyn] like to use Lyft,” he says. “If you’re in Queens, people like Juno.”

The more rides he completes, the more he gets paid, so “you want to be busy all the time,” he tells me. “Our time is money.”

That’s why Castillo rarely takes breaks throughout the day. We don’t make our first pit stop until 2 p.m., when Castillo runs into his mother-in-law’s apartment to use the bathroom. He does this once or twice a day, he tells me. Besides that, we pull over once more to stretch our legs.

Castillo doesn’t stop for a meal or eat during his entire shift. That’s not entirely normal, though: He usually packs a lunch from home that he’ll eat in his car, but today’s breakfast, he assures me, was filling.

“That’s a good day,” he tells me, especially considering he took more breaks than usual to accommodate my filming.

On his best day, Castillo took home $540 after nine hours of driving, thanks to surge pricing. One-fifth of that came from a single, lucrative trip to the airport, he says: “It was snowing and it was ugly outside. It was like 5:30 or 6 p.m., peak hours. They paid me like $110.”

While Castillo can earn about $6,000 per month, the expenses that come with the gig add up.

For starters, he needs a car. He drove a Nissan Pathfinder up until a couple of months ago, when he upgraded to a 2017 Honda Pilot. He bought it nearly brand new — it had just 25 miles on it — for about $40,000, he says.

The vehicle was a worthwhile investment, Castillo tells me, because it can fit more passengers, which means he can pick up bigger groups and earn more money. Plus, it comes with features like automatic braking, a back-up camera and a sunroof. “We go everywhere, so your car’s gotta be 100 percent,” he says.

Here’s a breakdown of the other expenses he has to factor in:

To pick up riders in New York City, Castillo needs a special license called a TLC driver license, which costs $252 to renew every three years.

Every other year, Castillo has to renew his car and bring it in for a thorough inspection. This costs $625: $550 for the renewal fee and $75 for the inspection fee.

As a rideshare driver in New York state, Castillo also has to do more regular inspections — every four months — at the DMV. These cost $37 each.

The cost of insurance depends on your driving record and can vary anywhere from $400 to $800 per month, Castillo estimates, though he pays closer to $400 a month.

Gas also varies per driver and depends on your car model, how much you drive and where you’re driving. Castillo says he fills up his tank every other day for $45. That’s about $675 per month.

This includes oil changes, tire repairs and brake repairs. Castillo has to change his oil every four to five weeks, which costs $70 each time.

Drivers are required to do a drug test every year and take courses in things like defensive driving and wheelchair passenger assistance, which they pay for out of pocket. Plus, Castillo buys cleaning products — he wipes down his leather seats every day — and gets the exterior of his car cleaned every few days.

Unexpected costs like traffic and parking tickets can also arise.

In total, that’s about $17,000 of expenses to account for each year. Plus, he owes taxes on his earnings. Like any freelancer, he fills out a 1099 tax form every year to report his income.

The best part of the job

Besides the flexibility that comes with being your own boss, Castillo loves the social aspect of the job.

On this particular day, we complete 15 rides and pick up about 30 passengers from all walks of life: a mother and daughter visiting from North Carolina, a caterer delivering lunch in midtown Manhattan and co-workers from a Brooklyn-based start-up that makes dog food.

Castillo talks to everyone. “I like to meet people,” he tells me. “I like to talk to people of different backgrounds.”

The hardest part of the job

The passengers can also be the toughest part of his job, though — dealing with the ones with attitude, that is.

The best way to handle unhappy passengers is to simply stay calm, he tells me, and to remember that “you only gotta be with them in the car for 10, 20 minutes.” After that, you never have to see them again.

Driving in New York City is no easy task, either, he adds, especially in Manhattan: “You gotta be aware of the yellow cabs, bikes, people. When the light is green, people are crossing the street so we always gotta be looking at our mirror every second. You always gotta be aware.”

What it takes to be a great rideshare driver

If you want to stand out, you need three things, Castillo tells me.

1. A phone charger for passengers. After all, “everybody always need a charger,” he says.

3. A good vibe. “Vibe is everything,” Castillo tells me, and it’s important to read your passengers, too. If they’re on a phone call, for example, turn the music down.

He’s gone above and beyond to make his car clean and comfortable: It’s outfitted with hand sanitizer, tissues, lotion, water bottles and chargers that are compatible for both iPhones and Androids. He’s even installed a Super Nintendo in the backseat that customers can play on their trip.

Castillo has earned his high rating — he has a nearly perfect five stars across all three apps and was recently recognized as a Rider Preferred driver by Uber — but the number doesn’t mean much to him. “I got a good rating but I don’t really pay mind to that,” says Castillo. “I just like to be a good person, good vibe. I say, if you’re good with somebody, good will come back to you.”