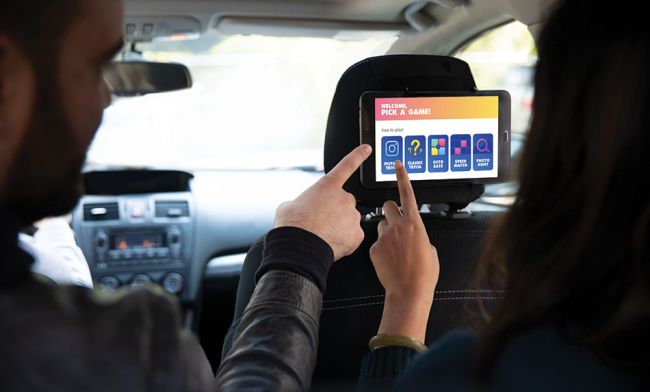 Octopus, a venture-backed technology company with a network of interactive video screens in 15,000 Lyft and Uber cars, has made a deal to be included in Nielsen’s Digital Content Ratings, starting in the second quarter.

Octopus already sells ads to Fortune 50 firms based on its own first-party data, but Nielsen will provide verification, now and in the not-too-distant future when cars drive themselves and the people in them watch television.

“We’re very bullish that there will be a world of autonomous vehicles,” said Octopus co-founder and CEO Cherian Thomas. “We’re not there yet, but we feel it’s going to go from rideshare to robotaxis to autonomy. And so rideshare is really our entry point into in-car entertainment.”

Octopus sees itself as an ad-supported VOD platform inside rideshare vehicles. The content is delivered via LTE, and data about viewers comes back every two minutes. Octopus is working with Sinclair Broadcast Group to utilize ATSC 3.0 as well. Sinclair led a $10.3 million funding round for Octopus in 2019.

In Talks With Carmakers

Thomas said Octopus is having discussions with the automakers as they get ready to market their self-driving models.

“Our audience loves Tesla and skews extremely high for electric vehicle ownership, so [vehicle makers] want to reach them,” Thomas said. Some of those automakers are going to make vehicles designed to be better for ride-share and they all have screens. “That’s what we’re working on now and we’d like to power those screens,” he said.

In the meantime, Octopus is selling ads targeting a captive audience. Its screens show commercials and play-along games that let riders win money. Its data says its viewers are young, with 76% between the ages of 18-49, and they over-index on income.

“We hit the sweet spot consumer that’s hard to reach because they’re on the go,” Thomas said, and 72% are cord-cutters. “These are the folks that you’re not reaching via traditional ad placements.”

Octopus is particularly attractive to advertisers because it embeds a sensor into each in-car device that reads how many humans are in front of it watching the content. The advertiser is charged only for those verified viewers.

Being part of Nielsen’s Digital Content Ratings will make Octopus look more like a video service than a billboard to advertisers.

“We present the first-party data to clients and they’ve been very impressed,” Octopus chief commercial officer Bennett Fogel said. “We send back data on every single engagement, every interaction, every click-through. It’s so engaging. Now having the third-party verification from Nielsen will make it a lot easier to move those video budgets.”

“We know we can make more money than we spend and we’ve found that there’s a huge demand to reach this audience in a captive setting,” he said. “Outside of in-flight entertainment and maybe movie theaters, you’re rarely getting sight, sound and motion and a captive audience. Now it’s really just about scaling it up.”